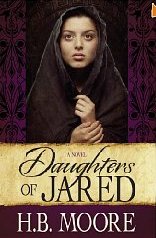 
H. B. Moore’s decade-long immersion in Book of Mormon research and Meso-American culture has produced eight previous novels based on this beloved book of scripture. In Daughters of Jared, her ninth Book of Mormon-based novel and eleventh book overall, Moore fills her pen with that rich understanding and illustrates this world in vivid detail, deftly interweaving excellent storytelling into an historical account of deception and intrigue pulled from the Book of Ether. The result is a novel with appeal to a broad spectrum of readers.
Moore’s use of a fictional, under-regarded, second daughter of Jared provides a unique perspective on the events of this dethroned king and his power-hungry eldest daughter. The author effectively ramps up the tension and character development in the book by playing the two sisters off one another, leaving the true nature of their relationship fragile and unclear, and the fate of the heroine in peril until the book’s end. It’s an interesting plot device that serves the book well. From the back cover:

Naiva, daughter of the dethroned King Jared II, lives in the shadow of her privileged elder sister, Asherah. But when Asherah develops a secret plot to return their father to the throne, Naiva’s resentment turns to fear. Thwarting the scheme becomes more complicated when Naiva discovers that Akish, the first man who has shown interest in her, is an integral part of the plan.

Asherah traps Akish in a ploy to make him marry her, breaking Naiva’s heart and leaving her feeling more alone than ever. Somehow Naiva must find the strength to stand against the encroaching evil in the kingdom and a sister who will stop at nothing to become queen. When Akish’s wickedness escalates and threatens to destroy the bonds of sisterhood, Naiva must decide between protecting her sister and honoring her new belief in the true God—a forbidden belief that could cost her life.

The story will be familiar to readers of the Book of Mormon, but this tale of power and corruption is ageless with universal appeal, even to those unfamiliar with the scriptures upon which Daughters of Jared is based.

No matter one’s familiarity with the Book of Mormon account, Moore’s research brings this complex culture to life, shedding light on previously obscure facets of Meso-American religion, customs, dress, diet, hierarchy, and geography. The author follows the historical record, and with the addition of a few support characters, she fills gaps with intriguing, plausible storytelling that breathes life into the history.

But Daughters of Jared serves as more than a good historical fiction read. Readers that may have an objection to fictionalized accounts of scriptural stories can trust Moore’s instincts. As in her previous books, Moore takes her readers into the culture, delivers a great read, and leaves them with a war-chest of insights and understandings of this civilization and culture that will enhance their personal scriptural study of the Book of Mormon.

I’d also recommend Daughters of Jared as an insightful family read. H.B. Moore is a deft writer and an avid scriptorian who strikes a perfect balance—able to deliver a compelling story while delicately touching on the principles and lessons contained in the original scriptural narrative. Her book, Daughters of Jared, offers parents an opportunity to launch into discussions on topics such as loyalty, accountability, faith in adversity, and a host of others.

Daughters of Jared is a book I highly recommend, but take full advantage of all the benefits it offers to enrich not only your pleasure reading, but your understanding of this period and people. Read more about this gem at http://www.seagullbook.com/lds-products-723398.html.
Posted by Laurie LC Lewis at 2:09 PM