Author Linda Gerber debuts "Hacked," the third book in her YA series about Cassidy Barnett,
reality TV star, a book that earns this praise from Publisher's Weekly:
"...lively and relatable Cassidy... steals the show."

I'm pleased to announce that Linda Gerber is sponsoring a terrific summer contest to kick-off "Hacked's" launch. The details are below. This is a to-die-for fun activity for Tween girls.

Introducing Cassidy Barnett. She’s not your average twelve-(almost thirteen!) year-old. While most girls her age are worried about school and clothes and boys, Cassidy has spent most of her life traveling the world with her travel reality TV-show host parents. She gets to visit fabulous places, spending time behind the camera and connecting with people via her popular blog. But when the producers of her parents’ show want to feature Cass on camera, all that starts to change. Now she’s got to watch what she says, how she looks, and what the world is saying about her. Because like it or not, it’s LIGHTS, CAMERA CASSIDY!

Cassidy stars in her own Middle Grade series, described as “iCarly meets The Amazing Race.” Publisher's Weekly calls Cassidy "lively and relatable" and says she “steals the show”. Her first episodes take her to Spain (CELEBRITY) and to Greece (PAPARAZZI) and in the latest installment, Episode 3: HACKED, to Costa Rica: Cassidy and the crew hit the rain forest of Costa Rica, where Cassidy’s thrilled to film publicity spots for her parents' TV show with her best friend Logan. 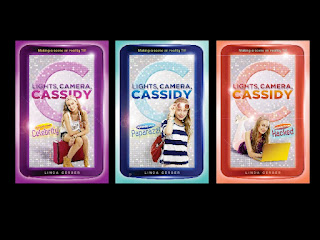 But there's a damper on her sunshiny outlook when she realizes that Logan is less than thrilled at being in front of the camera. Even worse, she soon discovers that someone has hacked into her blog and is posting some pretty negative things--jeopardizing her entire role on the show. Can Cassidy enlist Logan's help and figure out what's going on--before it's lights out for LIGHTS, CAMERA, CASSIDY?

To celebrate summer and this new release, Cassidy herself is hosting the LIGHTS, CAMERA, CASSIDY Charmed Summer Giveaway. Players can win charms, one-of-a-kind charm necklaces, and even a chance at an iPhone 4!

*Inside scoop! Check out Cassidy’s Blog for tips and hints: http://lightscameracassidy.wordpress.com/