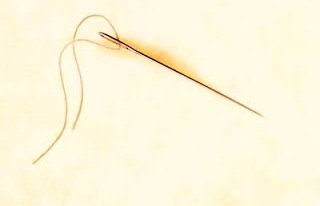 It was a blustery day in mid-December when the last stubborn shafts of autumn warmth retreated, paving the way for winter's arrival, and with winter, Christmas. Marta, the dark-eyed and equally talented daughter of a gifted Tailor, sat in her bed observing the changing of nature's guard through worried eyes. Her previously nimble hands lay weakly folded in her lap, their deftness stolen from her, along with her vitality by the same fevered thief that had taken her good husband, leaving her widowed with five, young children.

Pushing back the layers of fluffy comforters, she wrapped her thick robe around her and shuffled down the hall to examine what was once her workroom, a room locked against the inquisitive and sticky fingers of children. Limbless forms stood guard in the corners, keeping watch over shelves laden with fabric and trim. Bolts of satin and velvet, and piles of brightly colored gingham and silks were heaped on every shelf. Stacks of leather and a few furs lay bound, awaiting their transformation into jackets and purses and hats. Brightly painted tins held buttons and notions while spools of threads and trims sat on tabletops, waiting to adorn her creations.

Since it appeared that her hands would never have the strength or dexterity needed to sew the intricate, lovely designs of her past, she accepted that her career was over and had considered selling off the goods. Still, something in her had resisted. She knew that the bolts and notions were more than mere goods. They were the envisioned, but as yet unsewn and unseen clothes of her children's future years. Within each fold lay hats for winters she may never see, and and dresses for weddings she may never attend. Saddened, she sighed, recognizing that there were so many gifts she longed to give to her children . . . gifts her hands would never create. It would be Christmas with no gifts at all.

A thought crossed her mind. Her oldest daughter, Janie, was fourteen, and Conner, her only son, was barely five. Between these children, three other daughters had been born--Katie, Jenna and Lily--each of whom had learned basic simple stitches from watching their mother mend by the fire. Marta knew that with some practice, they could become her hands! And she quickly set about to prepare a surprise.

After calling to the children, she gathered them into her workroom and opened the door. The wonder-filled eyes spied the brightly colored cloths and their fingers wriggled with the desire to touch and sample everything. Marta smiled at their reaction, wondering now if she had been wrong to deny their rambunctious hands the pleasure of touching and handling the beautiful fabrics.

From the pocket of her robe she withdrew five slips of paper, each bearing the name of one of the children. After each child drew a name, they were told to gather fabric, notions and trim and set about to create a gift to present to their selected recipient. They squealed with delight as they dashed about the room, touching and feeling every bolt and button. One by one they spirited their selections away to their rooms to set about their tasks. Janie, already a fine seamstress for her age, was making Lily a ruffled frock. Katie, not quite as certain of her talents, settled in to sew a furry muff for Jenna. Each child in turn considered their talents and fashioned their best gift to give.

On Christmas morning, each of the children exchanged their gifts. Marta watched through tearful eyes as their precious offerings were given and received. When all the hugs were given and the thank yous said, the girls each scampered off to their rooms, returning with other boxes tied in brightly colored ribbons for Marta. Tears wet her face and pride filled her heart. She drew them close and whispered "I love yous" to each giver until the fatigue swept upon her again and the children left to allow her to rest. Just as sleep fell upon her, a tiny knock sounded at the door.

Connor entered his mother's room, sullen and sad. In his hands was a small leather bag he had made for her. The stitches were uneven and the seams were puckered, but it had been fashioned by his own hands. He had been about to wrap it in bright green paper when he saw the tufted pillow Katie had made. Worried, he compared his gift to the satin robe Janie had sewn, and had found his own offering wanting. When he had determined that every gift was superior to his, he had decided not to give his own.

Marta patted the cover beside her and Connor jumped up and into the bed. After asking to see the little bag, Connor reluctantly handed it to his mother. Turning it over and over, she commented on its workmanship and beauty. Tenderly touching a crimson stain she recognized as a drop of blood when a needle pricked her son's finger. Her eyes began to sting as she asked Conner questions about his design and craftsmanship. In reply, Connor pointed out each error, unfolding the story of his distractions and sewing disasters until they both laughed and cried. Soon, his once burdened heart was filled with pride as he began to see his masterpiece through the eyes of his adoring mother.

"I didn't think it was good enough," he confessed through watery eyes now sparkling with relief. "My hands are like yours. They don't work as well as my sisters'. But the bag looks a lot better since I gave it to you."

As Marta drew him in close and hugged him firmly, her heart stung at the thought that he had almost forsaken his gift because in comparison to others' work, it had appeared less. Her finger tenderly touched the crimson spot again. "It's a magic bag, Connor. It seems to become more beautiful with every passing minute."

"Things don't have to be fancy to be beautiful?"

"No they don't, Connor. Love makes them perfect."

"Maybe love will help you, Mommy."

Marta smiled, envisioning the simple garments her hands could yet fashion. "I believe it already has, Connor."
Posted by Laurie LC Lewis at 11:16 AM

Email ThisBlogThis!Share to TwitterShare to FacebookShare to Pinterest
Labels: Christ