THE MOST IMPORTANT READ OF 2012 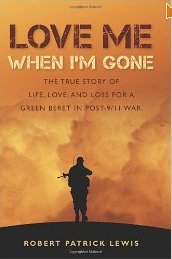 LOVE ME WHEN I'M GONE
by
Robert Patrick Lewis
﻿
One of my favorite books of 2012 was actually a manuscript of a novel slated for a 2013 release, but this military stunner made it to press before the holiday and studios are already talking about a film.


In Love Me When I’mGone, retired Special Forces officer Staff Sergeant, (SSG) Robert Patrick Lewis offers readers a golden ticket inside the exclusive world of U.S. Special Forces training and operations, and the tightly-knit web of brothers—Renaissance men with unequalled skill sets, operating in the most dangerous places and situations on earth.


This is not a sugar and spice tale. It’s a boots-on-the-ground, blood-sweat-and-tears soldier story, told with a soldier’s tongue in authentic soldiers’ speak delivered with occasional profanity and frequent military acronyms that draw readers into this elite society of brothers. Lewis’s dialogue conveys the urgency, pain, and frustration of war. It is a hard read emotionally, because most readers will have a face slap of recognition that we are too removed from the men and women defending our rights and privileges.


Lewis offers biographical glimpse behind the camouflage, beginning with the circumstances and events that set him on the road to military service. Put up for adoption at birth, he considers himself twice blessed to have had birth parents who allowed him the chance to be raised in a nurturing, adopted family with a deep military tradition. His father left the Navy and tied his hopes to a newly formed airline called Southwest, which Lewis regards as a second family. Despite all this support, Lewis lost his bearings following the cancer death of his mother. To rein his flailing son in, his father enrolled him in a military academy whose structure and rules put Lewis back on course.


Lewis returned to public school his Sophomore year and met a charming Asian coed named Cindy Chiu who secretly won his heart. After graduation, the two went their separate ways with only brief interactions, and then they lost contact for several years. Lewis was headed for a degree in business when 9/11 happened, and he chose to enlist in the Army in the hopes of becoming an Army Ranger.  In Lewis’s own words:


At my fathers urging I enlisted in the delayed entry program, which would allow me to finish out my college degree before leaving for Infantry basic training (boot camp). Less than a month after I walked across the stage and took my diploma from Texas State University in 2003, I was on a plane to Ft. Benning, Georgia to learn how to be an Infantryman, then off to Airborne school, then to Ft. Bragg, NC for Special Operations Prep and Conditioning (SOPC, the first of many weed-out courses designed to convince the weak to leave of their own accord), followed by Special Forces Assessment and Selection (SFAS) and the beginning of my two years in the Special Forces Qualification Course (the SFQC or, more commonly, the Q-course), being assessed and tested every single day on whether or not I had what it took to serve my country as a Green Beret.


Lewis is quick to point out the sacrifice families make when a soldier chooses the military as their vocation. After years of no contact, Cindy Chiu found him through social media, and she became his anchor, the person he dreamed of coming home to, the woman with whom he dreamed of building a future. Love Me When I’m Gone highlights the emotional toll separation and secrecy take on these Special Forces’ loved ones.


I still remember the day that I got her first message on MySpace; I returned from SERE school the day before, and was still bruised, battered, emotionally scarred and emaciated from spending a month as a POW in the North Carolina woods.  SERE is the Survival, Evasion, Resistance and Escape portion of the Q-course, and it was the very last part of my two-year journey of proving that I had what it took to wear the coveted Green Beret.


Both of my roommates were 18B’s, weapons specialists, Green Berets who can identify, fix, rebuild, and operate any weapon in use anywhere in the world, had been finished with the Q-course for several months.  I had been selected as an 18 Delta, Special Forces Medic, which, while it is one of the most coveted positions in all of Special Operations, adds a full year of medical training, testing, and hospital rotations to your duration in the Q-course.


As luck would have it, she had been searching for me all along as well.  Her first email to me was about three pages long, and after a week of exchanging messages on MySpace we graduated to all night phone calls.  It was just like we were teenagers again, and night after night I would stay on the phone until just hours before I had to get up to go to work, and I was constantly operating on just a few hours of sleep.


It was only a few weeks later that my orders finally came down: I was being assigned to the elite 1st Battalion, 10th Special Forces Group in Germany, with the first unit of Green Berets that had ever existed.  It was the most bittersweet news I ever received; I had been hoping and praying throughout my entire time in the Q-course that I would get this assignment to Germany, where my Grandfather had been stationed after WWII and my father had spent his formative childhood years, but now that Cindy and I found each other again it meant that our paths would once again separate.  I could hear the disappointment in her voice the day that I told her, and it made my heart sink.

Lewis takes readers right into this specialized world. It’s not all bullets and blood. Readers feel the toll inertia takes on warriors who are far from home, living in a state of readiness, but like race horses in the gate, tense as headlines and orders collide, delaying their release and insertion into battle. They fill the days with more training, repeating skills until actions are so instinctive they are, as Lewis calls them, “muscle memory.”


I was most impressed by the humanitarian work performed by these specialized peacekeepers, particularly by Special Forces medics like Lewis, who set up clinics to treat citizens in remote outposts, laboring to win the hearts and minds of people. Says Lewis in Love Me When I'm Gone, “If you take care of a man, he will fight for you; take care of his family, and he will die for you."


Love Me When I’m Gone runs the full spectrum of emotions. I cheered, felt my stomach knot, cried, and in truth, felt guilty that I was so unaware of the price soldiers and their families were paying for me, and for you. The combat scenes insert readers into the human drama, and the drama is intense. You understand in a new way how an individual can love another so much that he would take a bullet to save a friend. Again, in Lewis’s words:

It is something that cannot be explained or even understood until you’ve lived it; a man can’t know or fully appreciate his life until he’s been close enough to taste the end of it, and the bonds forged in battle are some of the strongest a man could ever have.  We are brothers, the men of ODA 022, and though we didn’t have the same blood running through our veins, we had all shed the blood of others together, and knew that none of us would hesitate to step in the way of fate and take a round or jump on a grenade to save one another.


After leaving Special Forces, Lewis began writing down his experiences to help fill in the gaps for Cindy, and to record them for his children. He consulted with his comrades to make sure he was getting the details and places right, and they were so moved by the project they encouraged him to turn it into a book so the misconceptions about Special Forces soldiers would be cleared up, and so people would simply understand what they were doing on that invisible line. It took time to get the manuscript approved by the Pentagon, and now that the book is out, Lewis’s main hope is two-fold: to provide strength to military spouses and families who suffer high divorce rates, and to support Veteran's charities like USA Cares (for which Lewis is a national spokesman) and The Special Operations Warrior Foundation.

Love Me When I’m Gone should be read by every American adult. Lewis cleaned up the language to make it a read parents could share with their teens with some prior editing. Will it jar your sensibilities? You bet. Will it change you? I hope so. We owe an incalculable debt to these heroes and their families, and understanding their sacrifice is a first step to repaying it.