IN HONOR OF GEORGE WASHINGTON 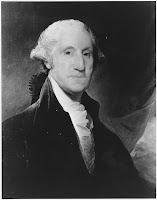 Last year, Gallup released the latest presidential poll. President Reagan was the winner, in fact, this question has been asked eight times in the last twelve years and the winner has consistently been Lincoln, Clinton or Reagan. George Washington, the father of our country, the leader of the Continental Army, victor of the Revolutionary War, the glue that held the Constitutional Convention together, beloved first President of the nation, the man who could have been a king but who resigned the presidency to secure this nation's liberty--this man comes in at number five, behind Clinton and Kennedy. What of Jefferson, the author of the Declaration of Independence, or Madison who framed the Constitution. Are we still grateful for these men? Do we even remember? Hmmm. . . .

I loved Ronald Reagan, and who can deny Abraham Lincoln's courage and vision, but couldn't the same be said of Washington? It all begs the question, "What do we actually know of our nation's presidential history?" Perhaps it raises an even more critical question. "What do we really want in a leader?"

While pollsters and pundits analyze every move or non-move by Barack Obama, we need only look at this poll to see that the American people are slightly schizophrenic when choosing a president. Obama was called "a rock star" by some voters who, if the polls are correct, now wish he was more decisive like Reagan. Others upset by his recent withdrawal of support by the "Defense of Marriage Act" seem to want a more morally conservative president, but then how does that jive with the number two ranking of Clinton, and Kennedy's number six slot, behind Washington? My head is spinning.

I'm over fifty. My peers and I grew up with the images of the presidents in every classroom. We were taught the biographies of the Founding Fathers, and we were quizzed on the major accomplishments of the early presidents. As a guest speaker, I've visited classrooms and I rarely see those comforting, familiar images anymore. They were once the supermen of history, but time and political correctness have been their Kryptonite.

As much as I've enjoyed the scrutiny of Lincoln's legacy and assasination, I wish some high profile author like Bill O'Reilly would take on the content of these other great men's contributions. Better yet, I wish parents and teachers would bring the pictures back out, dust them off and teach this generation about these visionaries. Tell the whole story--the good, the bad, the amazing stories of valor. Greatness can stand the scrutiny. The race is already beginning for 2016. What do we really want in a leader?
Posted by Laurie LC Lewis at 11:00 AM