CROWING: Jennie Hansen's Review of "The Dragons of Alsace Farm" for Meridian Magazine

Forgive me for crowing. But this review made my week! Thank you, Jennie Hansen!

THE DRAGONS OF ALSACE FARM by Laurie Lewis 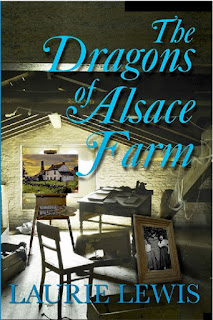 Two adults with horrendous childhoods that have left deep scars are drawn together at Alsace Farm, a farm owned by an elderly woman suffering from Alzheimer’s. Noah Carter was physically and emotionally abused by his father, then at eighteen eloped with a young Quaker girl who had second thoughts before morning. Upset, Noah crashes his vehicle and winds up in jail where he is beaten and molested by the other inmates. No one, not even the uncle he’d hero-worshipped all of his life comes to his rescue. For ten years he disappears into a world of substance abuse and bare existence living until the uncle, who is dying of cancer finally locates him. He returns to his uncle’s home where they make a shaky start to re-establishing their old relationship and the uncle encourages him to start a business of his own as a craftsman woodworker. He also pushes him into working for and repairing a nearby farm for an elderly widow who survived World War II as a child in France.
Tayte Donnelly is the child of two hippie artists who drifted around the country, mostly ignoring her, and caring more about drugs than for her. The happiest time of her childhood occurred when she was eight and her mother left her for two months with her grandmother. This idyllic time ended when her parents came for her and abruptly took her away, then informed her her grandmother was dead. Her own talent as an artist is beginning to garner recognition when she is notified, her parents have been killed in an accident, and her grandmother is alive, but has dementia and that as the woman’s only relative she has to see to some legal matters. Though the old woman doesn’t know who she is, Tayte decides to stay on the farm and care for her grandmother.
Agnes Devereaux Keller hides a secret in her attic. She has spent her life hiding from dragons, not living fire-breathing dragons, but powerful secrets, secrets concerning the Nazis, a daughter who ran away years ago, a man who betrayed her, her father, an old love, a spiteful, calculating woman, and so much more. If only she could remember which day it is and whether or not she fed the goats. She adores the young man who comes to help her, but wants nothing to do with the bossy young woman who cleans her house and throws away her anchors to reality.
This is a story of two injured people, picking up the fragments of their lives, and struggling to make sense of their pasts and build a much better future. It highlights the damage caused by poor, selfish parenting, and the difficulty of rising above past hurt, guilt, failures, misunderstanding, and oppression. It’s also a story of hope and determination.
Lewis has created outstanding characters who realistically portray the characteristics of the particular dragons each is fighting whether it is physical or emotional. Agnes’s dementia is very real as is the uncle’s cancer. So too, are the emotional flaws the two main characters carry from their years of physical or emotional abuse. The two young people learn a great deal about themselves and about love through the things they learn from Agnes. Love draws Agnes back from the terrible black abyss of dementia and love is the gift the uncle struggles to leave Noah, his wife, and his sons.
As four people struggle with the “dragons” in their lives, this multi-pronged story melds the plot line of each character’s story into an overall one of overcoming adversity, recognizing the worth of all individuals, and never giving up on the hope for love and belonging.
Laurie Lewis was born and raised in Maryland. She and her husband still live there where she enjoys the rich history of that region. They are the parents of four children. She has authored seven other novels, most dealing with patriotic or historical themes.
* * *
THE DRAGONS OF ALSACE FARM by Laurie Lewis, published by Willowsport Press, 356 pages, soft cover $13.53. Also available for e-Readers.
Posted by Laurie LC Lewis at 10:10 AM