Marsha Ward not only writes about pioneers and trailblazers, she is one. Ask the hundreds of authors who have benefited from the writers' organizations she's started and supported. Among the many beloved books she's written, none are more well-loved that her Owen family sagas. Marsha Ward has brought these characters to life in a new format, through a collection of traditional recipes straight from the Owens' family table. The book is called, From Julia's Kitchen: Owen Family Cookery. Get to know this author and her latest release.

Q: Marsha, you wear so many hats. Who are you as a person, versus as an author? 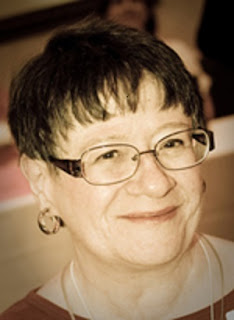 A: I am a hermit. I love solitude. I am very quiet, very shy. I'm quite uncomfortable in crowds because I usually end up a wall flower without anyone to hang out with. However, I'm also a ham, and have enjoyed being in musical productions through the years. I was raised in a musical family, and studied in college for a career in opera. That plan took a detour, though, and never came into being. Instead, I've taught many subjects in many venues.

Q: We leave a bit of us behind with every story, so what do you want to be remembered for, or as?

A: I'd like to be remembered, personally, as a kind and caring individual, and as a writer, for being able to sweep a reader away into a good story they can't bear to put down.

Q: I've enjoyed your Owen family saga, but what other genre(s) do you write in? 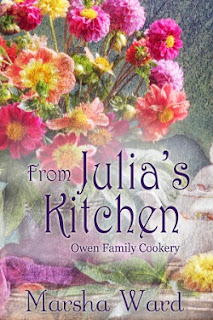 A: I started writing commercially as a journalist, so feature and news articles were what I wrote for several years. I've also won national prizes for poetry, and published columns in several periodicals. Other non-fiction works include sections and chapters in books on writing and publishing, and soon I’ll begin to release a series of informative books about indie publishing. My fiction works are Civil War era and later, basically Western novels and short stories, set in the 19th Century. All of my books include romantic elements. There may come a time when I'll write a mystery.

Q: What is in the back of your mind as your write? Do you seek to educate or entertain?

A: There's always an increment of education in my books, but mostly I write to entertain, to take people away from the hard realities of their lives and give them hope, through the examples of my characters, that they can get through hard times, even really, really terrible times, and find happiness at the end of it all. I think that’s going to be a badly-needed message in the times ahead.

Q: Where do you write your best stuff, and when?

A: Because I'm a widow, I have the luxury of writing in seclusion. That wasn't the case when I had kids at home and a husband, so I guess I can write in many circumstances. My best time is afternoon and evening, into the night. I'm not a morning person. Although I've tried to get myself on a schedule, life keeps happening, and I have many obligations, so I write in spurts when I have time available.

Q: What is your current book?

A: My latest release came out March 10 as an ebook, and is the treasured recipe collection of one of my characters in the Owen Family Saga, Julia Owen. It’s called From Julia’s Kitchen: Owen Family Cookery, and includes a scene suggested by one of the recipes, or “receipts,” as they were often called back then. Here's the description:

When Julia Susannah Helm was just a little girl in Pennsylvania, she discovered a “receipt” for hash in a kitchen drawer, written out in the hand of her father’s former housekeeper. Her brother Jonathan made her a small wooden box to keep it in. That was the beginning of her recipe collection, which became one of her most cherished possessions.

It was never more important to her than when she took it to Shenandoah County, Virginia, to help her cousin prepare for her wedding. Almost out of the blue, Julia became Mrs. Roderick Owen, and the recipe collection proved invaluable to her as a young bride.

Enjoy the fictional aspects of this book in the world of the Owen Family, and then make the real recipes to enjoy.

Of course, being a fictional character, Julia Owen didn’t really put the recipe collection together; I did. I had a lot of fun choosing the historical recipes and writing introductions for them, indicating how or when each one came into Julia’s possession. Most of them have been updated for modern cooks, but a few are curiosity pieces, and I left them in their original form.

Q: Where can the ebook be ordered?

Prior to March 10, it’s been available for preorder at Amazon.com, Kobo.com. iTunes, and other online retailers. Since Release Day, it's also been available at Smashwords and Barnes and Noble.com. Here are the links:

Q: One piece of advice/wisdom for the world?

A: Be a kind person, and cook up interesting projects, including food.

Didn't I tell you she was amazing? Now check out Julia's cookbook, From Julia's Kitchen:Owen Family Cookery, at these locations.