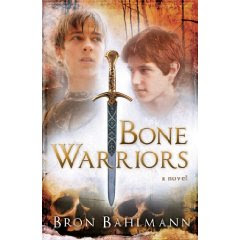 Historical fiction authors build their stories upon the solid framework of history. Fantasy authors, on the other hand, envision new worlds with strange rules, creatures, conflicts and languages of their own manufacture; and then they invite the readers to enter. It is a fragile world, fully dependent upon the author’s ability to sustain and maintain his creation throughout the novel. But young author, Bron Bahlmann has few worries on that point. Bone Warriors, his first novel, is solid, suspenseful, and intriguing.

Chapter one opens with a blood-lusting necromancer who incites war in order to claim its victims' souls. Thereafter, we follow the adventures of two boys from the village of Bylon. They are human-like, but these are not ordinary boys. Derrik Sparks is tall and strong for his age, a young man skilled with weapons, while the diminutive Tweaks is an inventor.

“Don’t go into the woods . . .” Derrik has heard that parental warning all his life, but he is more man than boy now, and he is slow to accept the gravity of his father’s counsel when Willan Sparks tells the boys that there are demons living in the woods near Bylon. Derrik’s doubt is quickly erased when the pair ventures away from home to test Tweak’s latest invention. They soon feel the ground rumble and they see flying creatures headed for Bylon as smoke begins rising from their village. Racing back to help their families, they find they are too late. Their familes and nearly every other villager is gone.

Their quest to find and free their families sets up encounters with strange beings from Bron Bahlmann’s vivid, creative mind. Bron fleshes out his characters with complex development and characterizations making it easy for the reader to become invested in these odd beings. I was particularly fond of the Ssaska the snake man, and the giants, whose language absolutely delighted me.

Bron Bahlmann is not limited to creating creatures. There is good tension in this book, with new hazards, friends, foes and suspense on every page. The action is quick and satisfying. His prose is excellent and his descriptive passages vivid, drawing the reader in until you feel, hear and see this singular world. And did I mention that Bron is fifteen?

But make no mistake. This is fiction any adult would be proud to place their name upon. I’m not a fantasy reader by nature, so it took a few chapters to hook me, but Bone Warriors

reeled me in and captured my interest, and I marveled over it as I read.

Bron's dialogue occasionally drifts into teen slang, pulling the reader out of Bron's bizarre fantasy world and back into reality. And having created such a powerful, depraved foe, I wanted a more dramatic resolution in the final battle. But these points do not diminish the pleasure of this novel, and at only fifteen, Bron has plenty of time to perfect his nearly-perfect craft.
Bone Warriors is not merely a bludgeon and bleed tale. I was particularly amazed by Bron's ability to weave a strong moral story throughout the book, and the twist at the end was poignantly unexpected and tender, assuring parents that they can feel good about the message of this remarkable author's wonderful book.
Distributed by Sweetwater Books, Bone Warriors is available on Amazon, and anywhere LDS books are sold. If you have children who love to write, buy them this book. It will entertain and inspire them.