"ILLUMINATIONS OF THE HEART"
by Joyce DiPastena 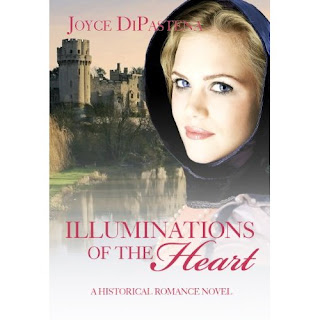 Not a big romance fan? Don't let the flowery teaser on the back cover of “Illuminations of the Heart,” fool you. This book is one meaty, intelligent, well-researched and exciting read for lovers of historical fiction. The romance? It's smartly written and delicious.

He spoke the name on a breath like a prayer. Then he lowered his head and kissed her.

Her heart is lost in that first embrace, her world shaken to its foundations. There is just one problem: her name is not Clothilde. It is Siriol de Calendri.

Trained in the art of illumination in the far-off city of Venice, Siri is directed by her late brother’s will to the county of Poitou in France, where she enters the guardianship of her brother’s friend, Sir Triston de Brielle. Once in Poitou, Siri hopes to find employment in an illuminator’s shop—until Triston unexpectedly snatches her heart away with a kiss.

Triston is a man of quiet honor and courage, but the guilt he carries for the death of his late wife, Clothilde, has left him numb and hesitant to love again. Worse yet, Siri bears an uncanny resemblance to his lost love. Or does she? Her merry laughter and twinkling eyes are very different from his late wife’s shy smiles and quiet ways. Yet when he gazes into Siri’s face, all he sees is Clothilde.

Then Triston’s past returns to threaten them both. Will his tragic life with Clothilde be repeated with Siri? Trapped between the rivalry of the king’s sons on the one hand and a neighbor out for vengeance on the other, Triston realizes it would be safer to send Siri away. But how can he bear to lose her again?

Siri is determined not to be cast off and not to live in another woman’s shadow. She has illuminated many a priceless book with pen and paint. But can her own vibrant spirit illuminate the darkness in Triston’s soul and make his heart beat for her alone?
***

I once read an article that referred to British actor Jeremy Irons as “swoon fodder for the thinking woman.” The same could easily be said about the talented Joyce DiPastena’s impassioned medieval romance, “Illuminations of the Heart.” I’ve had a copy of her book for several months, waiting for a block of free time to savor this novel which has been the subject of so much buzz. This week I finally cracked the cover open and my husband has had a new rival for my attention.

Ms. DiPastena scores high in every literary category. Her characters are rich and complex, her storyline moves along at a gallop—fast enough to keep you constantly engaged but not so quickly that you miss the wealth of her impeccable research and her deft writing style. Her wonderful research brings exciting detail to her settings, the characters’ wardrobes, the action, the weaponry, causing “Illuminations of the Heart” to educate as it entertains, and how it entertains!

I was intrigued by the second paragraph and a full-fledged fan by page two. Twists and turns abound and little cliffhangers are placed throughout the book, keeping you engaged and unable to resist turning the next page.

Let me also say that Joyce Dipastena writes with skill equal to that of the sword-wielding knights in her book. The action is swift and the dialogue is crisp, but it is the emotion, carefully woven into every scene, that plays your heartstrings like a violin. The passion and pain of the story is made all the more real because we soon discover that Ms. DiPastena has done her research. The history is accurate and rich, and we are growing and learning as we swoon for Tristan and empathize with Siri.

Joyce Dipastena is a masterful storyteller, and glimpses into the evolution of her career tell you she has paid the price in study and thought to reach this level of talent. In her own words:

“I’ve been writing silly little stories I never finished since junior high school. When I started a new story my freshman year in college I thought it’d end up the same as all the others…begun but never finished. But this one, my first attempt at a medieval romance, somehow captivated my attention and carried me through all the way to the words “the end”. It took me six years to get there, four years undergraduate and two years of graduate school. Although that book was never published, I’m still in love with its hero to this day!

"My inspiration comes from many different sources. Sometimes it comes from a book I’ve written before. For example, my first published book, Loyalty’s Web, was based on characters from that first unpublished novel I wrote in college. The hero and heroine of Loyalty’s Web were an elderly married couple in that early romance, and I became curious to find out how they had met and fallen in love, so I wrote Loyalty’s Web to find out the answer.

"Illuminations of the Heart" is an absolute charmer. If you enjoy a smartly-written romance with danger and intrigue, you’ll adore this book, which is available in Deseret Bookstores and some Arizona Barnes & Nobles. It can be ordered directly through Barnes & Noble and Borders bookstores, or ordered online at DeseretBook.com (http://deseretbook.com/) Amazon.com (http://www.amazon.com/), BarnesandNoble.com (http://www.barnesandnoble.com/), and Borders.com (http://www.borders.com/).
Posted by Laurie LC Lewis at 8:10 AM

Email ThisBlogThis!Share to TwitterShare to FacebookShare to Pinterest
Labels: Heart