I ran for student body president in high school, and having spent three years working in the rank and file, I had learned what platform 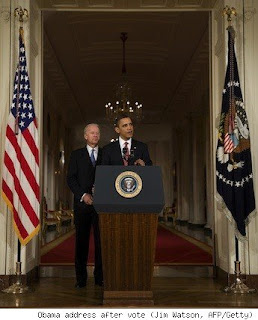 promises could be ethically and legally made. My opponent offered students things he could never deliver--smoking privileges, policy changes, the sun, the moon and almost everything in between. Decades later we've spoken about that race, and in hindsight he laughs over his naivete. Even then, most of us could determine between the deliverable and the undeliverable or delusional. Everything, no matter how delightsome and/or noble, comes with consequences. Even as kids, the majority of us knew it was much easier to promise than to deliver. What has happened in a generation?

By all rights I should be dancing in the street today, and the White House and Dems should be counting one more happy constituent among their health care reform-loving flock, but I cannot stand with them. My family could be the poster family for this bill, as I'm sure could many of yours. We've faced nearly all of it--catastrophic illness, insurance coverage caps, post-college uninsured kids, denial due to pre-existing conditions, loss of coverage due to job changes, taking unwanted jobs simply because we needed the benefits--so I'd love to see sensible, compassionate health care reform, but the package passed last night is wrong. It's simply, utterly wrong.

The pro-bill-ers get my hackles up when they paint those who opposed the bill as lacking compassion, ignorant or uninformed. That is a false and prejudiced illustration of their opposition. Unlike the supporters who see only the short-term benefits of expanded access, anyone who looks down the road can see trouble, big trouble ahead.

They've opened the door to every American, which I applaud in theory, but a door to what exactly? In the mania to pass this bill little to no care was given to lay a working foundation capable of backing up the deed with anything real. Who will provide all that "expanded-access?" There is a critical shortage of Primary Care physicians in this country. Right now, the percentage of med students choosing Primary Care as their specialty is about 2%. It is estimated we will need about 40% of our med students to choose this field to provide for the medical needs of all the newly insured. How will we get there? The plan is to provide incentives to encourage people to enter that field, but that will take years and in the mean time, the quality of primary care will deteriorate.

Speaker Pelosi provided a tender list of benefits families will enjoy once health care reform passed--freedom to follow their entreprenuerial spirit without the fear of losing health care benefits. Beautiful sentiment. But if businesses lay off employess because they can't afford to insure them or pay the fees for failing to do so, the economy will lag further. And where will these new entrepreneurs get their start-up capital?

Here are a few more questions? Will President Obama's Presidential memo, because it-has no legal authority, really prevent any tax-payer dollars from being used to fund abortions as Representative Stupak wants so desperately to believe?

And how is it that so many economic geniuses have crunched the numbers on this bill, yet no two representatives nor the President himself can come up with the same price tag for it? When one estimate puts the cost in various billions of dollars, and Speaker Pelosi announces that it will cut the deficit by a trillion dollars, the real truth is that none of them have any idea what will happen to the economy down the road.

And what about the over-arching concern that trumps everything else for me . . . the idea that our elected representatives evidently believe we are so stupid, so uninformed, so void of compassion that they must ignore the will of the masses and choose the destiny of this land in complete defiance of the will of the people. That idea frightens me. What else will they do "for our own good?"
Posted by Laurie LC Lewis at 9:54 AM