HEADING TO UTAH FOR TWO WEEKS 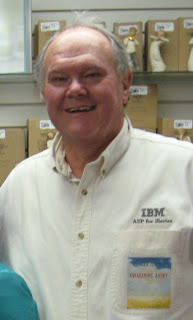 I'll be in Utah for two weeks beginning tomorrow. It will be a great trip. Our daughter-in-law is graduating from BYU's School of Nursing on Friday. She'll be the third nurse in our family. We're really proud of her!

The LDStorymakers' annual writers' conference is the same weekend. so after celebrating Brittany's accomplishments I'll shoot over to the Provo Marriott to join my fellow LDS authors for great workshops, booksignings and the Whitney gala. I'll be signing copies of all my books, so if you're in the neighborhood, stop by and visit. It would make my day!

After all this excitement I get to settle in with family for the remainder of the trip and play with grandchildren and struggle to dominate my competitive children in Settlers of Catan. (I usually lose because I'm nice and I trade with everyone.)

So it will be a wonderful two weeks. However, a two-week absence raises special hubby-concerns.

Let me preface my following remarks with a few adoring comments about Tom. He's a great man--extraordinarily mellow, kind, and supportive to the nth degree. (See the shirt he's wearing for the "Awakening Avery" book launch? He's simply not domestic. It's a mixed bag of blessings and curses. He's not likely to notice that the rugs need vacuuming or that the dishes need to be done. He'll by-pass the moldy cheese but he probably won't think to toss it out.

It was a great blessing when the kids were little. If I had had a bad day and the house looked sorry, he never mentioned a thing, and in fact was just as likely to tell me how great it looked. I was dubious about these undeserved comments until I finally realized that he really just doesn't see or process household things.

And so, for his safety, I have to rummage through the fridge and toss out anything perishable, likely to expire and cause toxic death, or things that will unnerve me in their likely-to-decompose state. That's today's chore. I have to make sure his favorite slacks aren't rumply, because he just might wear them anyway, and I also need to make sure a few of his favorite snacks are tucked into the pantry.

So I'm hubby-proofing the house today, and then I jet west. Maybe I'll see you in Provo!
Posted by Laurie LC Lewis at 10:46 AM