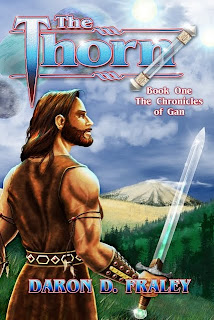 "THE THORN: Book One of the Chronicles of Gan"
by Daron Fraley

Daron Fraley’s “The Thorn, Book One of the Chronicles of Gan,” is a unique YA Speculative Fiction novel wrapped around a fascinating premise. Gan is a distant planet with three moons and two suns, whose people await heavenly signs that will announce the earthly birth of Christ, who they know only as “The One Who Would Suffer." The religious symbolism of Gan as one of the many “worlds without number” adds a refreshing perspective on this tale of good versus evil, and the quest to unite a divided people through hope in the promise of The Holy One.

“The Thorn” opens powerfully with an attack on the Danielite city of Hasor by Gideonite warriors who murder Samuel, the king, establishing the struggle between the three powerful, warring tribes, the offspring of three brothers—Daniel, Uzzah and Gideon.

The root of the conflict is centuries old, dating back to the first man on 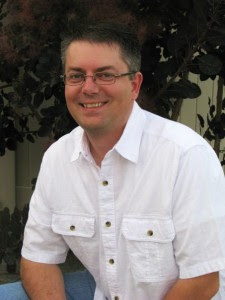 Gan--Noah, father of the three brothers. Before his death, Noah told his sons the prophecy regarding the coming of “The One Who Would Suffer,” before giving them each a blessing, charging them with a sacred responsibility to protect a legendary scepter that holds “the Thorn,” symbol of the Holy One’s foretold coming.

Noah also assigned duties to each tribe to insure that future generations would grow in peace and faith. Gideon and his people were to watch out for the welfare of the other tribes. Uzzah and his people were to serve in and around the temples, while Daniel received the birthright, making his tribe the ruling clan. But the tribe of Gideon rose up against their brethren, thrusting Gan into war.

In book one, Samuel is murdered for refusing to relinquish “the Thorn” and the whereabouts of his son and heir to the throne, Jonathan. Torn between his love for his father and his duty, Jonathan takes refuge in the woods where he watches Gideonite patrols march his kinsmen and Uzzahites away in captivity. Eventually, he sees his friend Eli, an Uzzahite, being led away. Jonathan wields his wondrous glowing sword, freeing Eli, and taking a young, reluctant Gideonite soldier captive. This soldier, named Pekah, becomes another of Jonathan’s allies, and a providential figure in Jonathan’s quest.

Fraley has created a primitive, albeit wondrous world which he describes with vivid detail. His efforts to draw the reader into this world sometimes results in long, descriptive passages that occasionally slow the read. Several chapters are laden with backstory that is essential, but presenting it in large blocks caused a few middle chapters to lag a bit. Don't let that deter you. I found the second half a solid page-turner and the ending compelling.

Pekah becomes the most charismatic character in this volume. Jonathan never quite rises to the heroic stature expected from a potential king and hero, but watching this character continue to grow and develop in future volumes will be a delight.

Though the cover gives the book a young YA feel, the story appeals equally to adults. The storyline could easily launch thoughtful, non-preachy family discussion on topics such as faith, loyalty, repentance, mercy and forgiveness. I hope parents will read this one with their children. Used in this manner, "The Thorn" exceeds being a satisfying read.

I expect this series to really take off. "The Thorn" proves Daron Fraley's ability to successfully crest the biggest hurdle—creating a marvelous world that challenges the imagination while presenting suppositions that touch us spiritually as well.
Posted by Laurie LC Lewis at 3:16 PM