WHAT DOES "BEING AN AMERICAN" MEAN TO YOU?

One of the items that intrigued me while conducting the research for "Oh, Say Can You See?" was the emerging idea of what "being an American" meant to the people in Key's day. The concept hadn't cemented itself into the peoples' mindset yet. Following the Revolution, this was a transitional period from the intense state pride and fear that the federal government would become a new king in their lives, to the realization of the absolute need to rally as a united people. They had already lost their capital for the most part, and 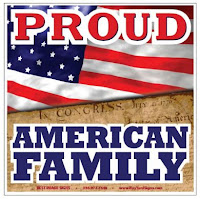 now they believed Baltimore loomed as the do-or-die moment to preserve their identity. And they almost learned the lesson too late.

As the bicentennial draws near, most modern historians will likely attest that destroying American liberty was never Britain's aim in 1812, but historical correspondence proves the Americans in that day believed everything was at risk.

We have similar concerns. We question whether our state is "blue" or "red," and note that the tenor in our cities leans liberal while our suburbs remain conservative. The name-calling and fist- 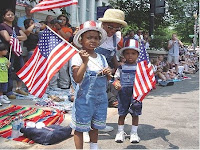 waving is worrisome, but I suppose it's been an aspect of all political debate since the idea of freedom ignited in men's hearts. During the early cries for a break with Britain, the debate caused some Americans to shoot one another in the streets. Jefferson felt it was an understandable outcome of the step they were about to take.

So here's this week's question. What does being an American mean to you? To some, Americans are the symbol of hope and generosity. To others, we are audacious and rude. Some see 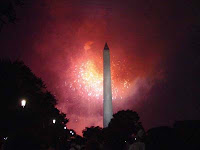 Americanism as an attitude. Others, as an action. Cite some examples, or just give me your opinion. The answers will be diverse, but that's the point. And even if you're not an American, what do you think when you hear that term?

Your reply will enter you into this week's drawing. Weekly winners will receive an autographed copy of any volume from the Free Men and Dreamers series. Weekly participants will also be entered into the grand prize drawing for a signature "Oh Say Can You See?" silver necklace commissioned especially for the Free 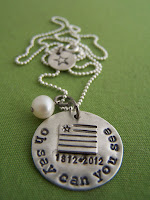 Men and Dreamers observance of the bicentennial of the War of 1812 and the Star-Spangled Banner.

Additional entries can be earned by
1. Posting the trailer, on your blog, or
2. On your Facebook page
3. Post that you already are, or become, a follower of this blog
4. Add "Oh, Say Can You See?" to your Goodreads "books-to-be-read" list.
Each entry must be posted separately below to be counted. The drawing will be held at midnight, Sunday, November 14th.
Posted by Laurie LC Lewis at 6:36 AM