IN HONOR OF COLUMBUS 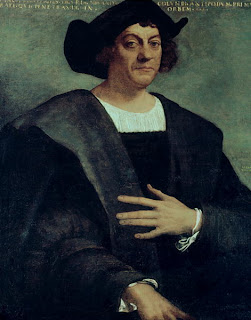 I fell in love anew with Christopher Columbus while researching Free Men and Dreamers. I say anew because this great explorer enjoyed at least an annual love fest in classes during my grade school years. We colored dittoed renderings of the Nina. Pinta, and Santa Maria, studied his life and wrote reports about his amazing discoveries, we recited the poem, "IN 1492."  A cardstock print of Columbus hung in the front of our room along with George Washington, Thomas Jefferson, and Abraham Lincoln. Are any of them still hanging in classrooms?

Did you know Columbus set sail with a desire to spread Christianity to people who had never heard of the Christ? Did you know he wrote a book about the spiritual whisperings he felt were guiding him? Did you know he returned to Spain in chains?

Like most of our traditional heroes, the luster of Columbus's accomplishments is dimming. No one was aware of the dangerous germs the Europeans carried in their systems, nor of the consequences contact with native peoples would have on them. Disease spread to a people without immunity, and many died. It was tragic, and unforeseeable. Also tragic is the idea that political correctness has reduced the heroic accomplishments celebrated in my day to a study of their failings. They are measured against modern sensibilities rather than being judged against the information available to them in their day. One by one, they fall.

So let's stop the clock for a second and revel in Cristobal Colombo's accomplishments. I'm posting a link to a short quiz, and I'm offering two shelf-worn but autographed books as an incentive to take it.

We'll do this on the honor system. Take the quiz, and report your score. The person with the highest score will win the books. Contest closes out at midnight on the 11th.