IF YOU WANT SOMETHING TO LAST FOREVER, YOU TREAT IT DIFFERENTLY. . . .

I'm a visual person. Tell me a story that plants a picture in my mind, and I'll remember it--well, I'll remember the gist of it--forever. That's why I fell in love with this particular excerpt from a talk given back in 2003. It planted a vivid, metaphorical image, that of a bride's cherished silver and the care she took to protect and preserve its beauty, as a marital standard. It keeps coming back to me, like a rubric, prompting evaluation and course corection. "How am I doing on this?" it prompts us to ask ourselves, reminding us that we need to honor and cherish our unions if we want good marriages.

You could base a thesis on the principles contained within. Given by F. Burton Howard, it remains one of my favorites, and it's especially perfect today. Tom, I hope you're reading today. This one's for you, honey! Happy Valentine's Day everyone!
**********************

By F. Burton Howard, emeritus member of the First Quorum of the Seventy:

. . .I think eternal marriage cannot be achieved without a commitment to make it work. Most of what I know about this I have learned from my companion. We have been married for almost 47 years now. From the beginning she knew what kind of marriage she wanted.

We started as poor college students, but her vision for our marriage was exemplified by a set of silverware. As is common today, when we married she registered with a local department store. Instead of listing all the pots and pans and appliances we needed and hoped to receive, she chose another course. She asked for silverware. She chose a pattern and the number of place settings and listed knives, forks, and spoons on the wedding registry and nothing else. No towels, no toasters, no television—just knives, forks, and spoons. 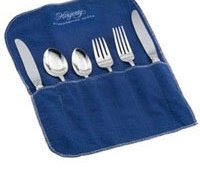 The wedding came and went. Our friends and our parents’ friends gave gifts. We departed for a brief honeymoon and decided to open the presents when we returned. When we did so, we were shocked. There was not a single knife or fork in the lot. We joked about it and went on with our lives.

Two children came along while we were in law school. We had no money to spare. But when my wife worked as a part-time election judge or when someone gave her a few dollars for her birthday, she would quietly set it aside, and when she had enough she would go to town to buy a fork or a spoon. It took us several years to accumulate enough pieces to use them. When we finally had service for four, we began to invite some of our friends for dinner.

Before they came, we would have a little discussion in the kitchen. Which utensils would we use, the battered and mismatched stainless or the special silverware? In those early days I would often vote for the stainless. It was easier. You could just throw it in the dishwasher after the meal, and it took care of itself. The silver, on the other hand, was a lot of work. My wife had it hidden away under the bed where it could not be found easily by a burglar. She had insisted that I buy a tarnish-free cloth to wrap it in. Each piece was in a separate pocket, and it was no easy task to assemble all the pieces. When the silver was used, it had to be hand washed and dried so that it would not spot, and put back in the pockets so it would not tarnish, and wrapped up and carefully hidden again so it would not get stolen. If any tarnish was discovered, I was sent to buy silver polish, and together we carefully rubbed the stains away.

Over the years we added to the set, and I watched with amazement how she cared for the silver. My wife was never one to get angry easily. However, I remember the day when one of our children somehow got hold of one of the silver forks and wanted to use it to dig up the backyard. That attempt was met with a fiery glare and a warning not to even think about it. Ever!

I noticed that the silverware never went to the many ward dinners she cooked, or never accompanied the many meals she made and sent to others who were sick or needy. It never went on picnics and never went camping. In fact it never went anywhere; and, as time went by, it didn’t even come to the table very often. Some of our friends were weighed in the balance, found wanting, and didn’t even know it. They got the stainless when they came to dinner.

For years I thought she was just a little bit eccentric, and then one day I realized that she had known for a long time something that I was just beginning to understand. If you want something to last forever, you treat it differently. You shield it and protect it. You never abuse it. You don’t expose it to the elements. You don’t make it common or ordinary. If it ever becomes tarnished, you lovingly

polish it until it gleams like new. It becomes special because you have made it so, and it grows more beautiful and precious as time goes by.

Eternal marriage is just like that. We need to treat it just that way. I pray that we may see it for the priceless gift that it is, in the name of Jesus Christ, amen.
Posted by Laurie LC Lewis at 9:16 AM