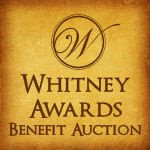 As prophesied by Orson F. Whitney, an early apostle of the Church, LDS authors are attempting to produce excellent literary works, fulfilling Whitney's vision that “We will yet have Miltons and Shakespeares of our own.”

More and more people are seeking value-based, uplifing media that is also crisp, intelligent and challenging, and LDS authors are answering that call. The Whitney Foundation and Committee was established to reward LDS authors for raising the bar and the 2008 Whitney finalists were announced yesterday:

SALT LAKE CITY, UT: The Whitney Awards committee today announced the finalists for the 2008 Whitney Awards, a program which honors the best novels by Latter-day Saint writers. Sponsored and endorsed by LDStorymakers,an LDS authors' guild, the Whitney Awards offer national recognition to authors whose books win in one of eight categories.

To be eligible for consideration, a book must have received at least five nominations from its fans. More than one hundred works by new and established authors in both the LDS and national markets met the preliminary criteria. Once a book is nominated, juries of authors and critics narrow the nominees down to five per category.

This year's nominees are listed below in alphabetical order by genre:

ROMANCE: Seeking Persephone, by Sarah Eden; Servant to a King, by Sariah Wilson; The Sound of Rain, by Anita Stansfield; Spare Change, by Aubrey Mace; Taking Chances, by Shannon Guymon.

SPECULATIVE: Ender in Exile, by Orson Scott Card; The Great and Terrible: From the End of Heaven, by Chris Stewart; The Hero of Ages (Mistborn, Book 3), by Brandon Sanderson; The Host, by Stephanie Meyer; The Wyrmling Horde: The Seventh Book of the Runelords, by David Farland.

GENERAL FICTION: Bound on Earth, by Angela Hallstrom,;The Reckoning, by Tanya Parker Mills;Waiting For the Light to Change, by Annette Hawes; Fields of Home, by Rachel Ann Nunes; Keeping Keller, by Tracy Winegar.

BEST BOOK BY A NEW AUTHOR: Bound on Earth, by Angela Hallstrom; The Reckoning, by Tanya Parker Mills; Spare Change, by Aubrey Mace; Traitor, by Sandra Grey; Waiting For the Light to Change, by Annette Hawes.

NOVEL OF THE YEAR: Bound on Earth, by Angela Hallstrom; Fool Me Twice, by Stephanie Black; The Hero of Ages (Mistborn, Book 3), by Brandon Sanderson; Sun and Moon, Ice and Snow, by Jessica Day George; Traitor, by Sandra Grey.

This ballot now goes out to members of the voting academy, a select group of LDS publishers; bookstore owners, managers, and employees; LDS authors; print and online magazine publishers; reviewers; and others working in the field of LDS literature.

Winners will be announced at a gala banquet on Saturday, April 25 at the Marriott Hotel in Provo, Utah. Tickets are now on sale at www.WhitneyAwards.com.

Special Lifetime Achievement Awards will also be presented that night to two persons whose bodies of works and tireless efforts have made a significant impact on the field of LDS popular fiction. This year's honorees are Kerry Lynn Blair and Orson Scott Card.

If you're looking for great reading material for your dollar, you could do no better than to choose from this list of excellent books.

Thank you to those of you who nominated my Twilight's Last Gleaming. I know it sounds trite, but it really was an honor to even be considered amongst such fine authors and their outstanding works.
Posted by Laurie LC Lewis at 9:22 AM