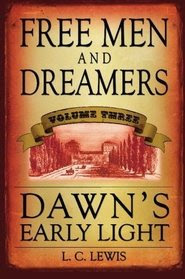 I've been waiting on pins and needles for this review by Jennie Hansen. A prolific author herself, Ms. Hansen knows literature, and her reviews are insightful and honest. She's recently been buried by the task of reading and evaluating books for the coveted Whitney Book Awards, so I was especially thrilled and apprehensive when I received notice that her review of "Dawn's Early Light" posted. To my great pleasure, the review was lovely. Thank you, Jennie Hansen, for giving "Dawn's Early Light" a positive nod.

When economics forced booksellers to tighten their belts, several loved series were severely shortened, delayed or dropped. This happened to the Free Men and Dreamers series. With two volumes published, the series was cancelled. Lewis persevered, engaged a top level editor, and proceeded to self-publish Dawn's Early Light, the third volume in this series. This volume details a piece of American history that is both painful and often overlooked in a study of our past---the invasion of British troops on our nation's capital and the burning of irreplaceable books and documents along with the President's House and the Capitol Building.

Jed and Hannah are married now, but with war looming over them, they have little time together. With the threat of Napoleon removed as Britain's main focus, British ships and troops are freed to subdue the upstart Americans. Britain's House of Lords is divided over the war and without a leader of sense or sensitivity over the nation, there are limited checks and balances which lead to depravations, theft of property, and unclear policies.

The Creole Sebastian Dupree and his mercenaries attack the Willows and leave it and the White Oaks farms in shambles. Not everyone survives. And as the British move toward Washington, the capitol is paralyzed by weak leadership, unclear lines of authority, and personal egos. Farms are burned, stock and provisions stolen, and the land laid waste as the red coats proceed. The untrained Americans retreat too readily and men flee to see to their families’ safety instead of maintaining their military positions. Some slaves maintain their masters’ homes or fight alongside the militias, others flee to the British believing they will be granted freedom. Freed slaves are caught in a strange middle ground where neither side trusts them.

This volume is filled with both heroic and cowardly acts. Loved characters from the earlier volumes play strong roles again as the War of 1812 progresses.

Dawn's Early Light is, in my opinion, the best written of the three volumes in the series. It is an important reminder of America's roots and the human drive to achieve freedom. Both characters and the plot are believable and are based on meticulous research. It tore at my heart, as though events like Washington burning occurred just yesterday. Historical fans and those who read the first two books in this series will enjoy this volume. My only complaint is that it ended too soon. I wanted more closure without waiting for volume four.
Posted by Laurie LC Lewis at 12:22 AM