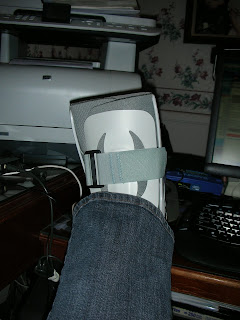 Humility generally comes when you least expect it, frequently in the most unexpected ways, but the humiliating experiences that teach this vital principle are often tempered by the sweet accompaniment of the Tender Mercies of the Lord.

My most recent plunge into humility came on Saturday while helping some neighbors move. My inner circle is small--primarily composed of family, and friends from attending the same church for twenty-five years.

I've also been blessed with very good neighbors, some I know better than others, including a generous pair who've opened their home to Tom, and me, and countless other friends many times for barbeques and other gatherings. So when they decided to move, I was pleased to have an opportunity to give something back.

I rode to their new house in someone else's car, and an hour after we arrived I missed a small step down, rolled my foot, and fell face-first on the floor. I was alone at the time of the incident. Stunned, I needed a few seconds to collect myself before performing an elemental triage--Brain clear? As good as it probably was before the fall. Neck in tact? It turned, so that was encouraging . . .) Arms? hands? Back? Check.

I pulled my dignity together and eventually rose to my knees. The right foot was feeling pretty spiffy, but the left one . . . ? Not so good. As soon as I stood on it I knew it was hurt. Klutzy people like me who fall often have a sixth sense about these things. We can identify a simple, ouchy sprain from a break in seconds, and this pain felt like trouble.

Aside from the great blessings already noted, more of the Lord's tender mercies began to kick in. After my fall, the first face in the room was one of only two people helping out that I actually knew--another neighbor. In such an embarrassing moment, it's great to have someone by your side who has spent time with you when you were vertical, stable, and coherent . . . someone who knows that most of the time you're a normal, responsible person. This sweet neighbor smiled encouragingly and helped me hobble down the steps.

Tender mercy two? Among the other 30 or so moving helpers were six EMTs. What are the chances of that happening in any random crowd? Two of these previous strangers immediately set me in a chair, elevated my leg, filled a bag with ice and did a more professional triage on my foot, while others provided support in innumerable ways.

Tender mercy number three? Many offers of rides were presented, but the thought of going to the ER with anyone but Tom was daunting. My busy husband was in town, and though I couldn't reach him at first, he hurried and took me to the ER as soon as he heard the news. There we found out that the break was the best of all foot breaks, the fifth metatarsal, with a great record of healing without surgery. It was also the type of break that allows the injured to walk with support in a few days. Perfect considering that I'm planning to be in Utah at the end of the month for book signings!

So let me add that my Christmas laptop is now loaded with all my files and ready for me to spend a few days in bed working. Hopefully I'll be incredibly productive and accomplish tons of writing, reviewing and twittering on a great Pioneer History project several authors are invested in.