I've developed a theory over my child rearing years 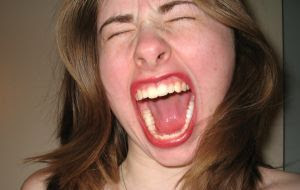 called "The RAHHH! Principle. It is that frequently, and predominantly in young males, all uncomfortable emotions come out as "RAHHHHHHHHHHHHHHH!" Fear, loneliness, embarrassment, pain and anger all sound pretty much the same. I was reminded this week that I am not immune to similar reactions.

This week's signings went well. I met some lovely new readers and enjoyed meeting many who are already invested in the series. There was only one notable glitch--I was rear-ended on my way to the Layton Hills Mall signing.

I was sitting at the light at the bottom of a ramp when I felt a definite jolt, more from a vehicle rolling into me than crashing into me. Several seconds passed before the driver of the other vehicle made any attempt to respond, and during those moments I ran the situation, and the options available to me at this busy intersection, through my increasingly stressed mind. My first response? I glanced over my shoulder and shot the errant driver "a look."

It must have been pretty fearsome, or at least my frustration must have been quite evident, because when the rattled driver exited his vehicle and introduced himself, his contrition was complete, immediately settling me as well.

My knee-jerk reaction had many roots. I was at a very busy intersection, driving my son's car; I had places to be and people expecting me soon; and frankly, during the pause between the bump and his introduction, I began to wonder if he was going to try and intimidate me. Add to that the fact that the legal differences between handling a fender-bender and an accident, as well as determining when to call the police, were unclear to me, particularly since I was out of my own stomping ground. Lastly, my broken foot made everything more complicated. In truth, I was simply unnerved and worried, but to the driver, I'm certain my expression looked like pure fury.

From the very first word he was kind and apologetic, and instantly all my guards went down. I kept wondering how tense things could have been if he had approached with any other nmanner. As we are always taught, "a soft answer turneth away wrath," and it surely did last weekend.

If we were psychic, we might be able to determine the difference between a look of startled worry versus anger, but the burden really falls to the injured party to rise above the "RAHHHHHHHHHHHHH!!" principle.