Back in April, when we were preparing to release "Awakening Avery," I received a request for an interview from a lovely a writer named Linda Weaver Clarke. Linda has a diverse background in several of the arts, including the publication of five historical romance novels. She recently switched genres and she's currently celebrating the release of a new mystery adventure titled, "MAYAN INTRIGUE."

In conjunction with the book's release, Linda is sponsoring a one-week contest on her web site. At the end of the article you'll see the details for entering.

Linda offered to write a guest post on my blog today, but before we begin, let me say that Linda is a pretty inspiring woman. After raising and launching her family, she ended a thirty-year absence from the classroom and returned to college, receiving her Bachelor of Arts Degree in Theatre and Music from Southern Utah University. Additionally, she received the Outstanding Non-Traditional Student Award for the College of Performing Arts in 2002. She's a great example to any of us who set our dreams on the back burner for a time to dust off our paints, our computer, or our instrument, and make those dreams come true.

Those of you who love to write will enjoy this lesson on the different techniques required for specific genres. Readers will enjoy these tips as well. Congratulations on your new release, Linda! Welcome, and take it away!

Thanks, Laurie! I thought I'd discuss the different techniques used in the writing of these two genres:
ROMANCE vs. MYSTERY

I have written five historical romance novels but have changed to mystery. The writing process between romance and mystery is quite a change with a completely different mindset. It’s so different from telling a love story. With romance, you plan out the plot around the meeting of a couple. As you write, you develop some sort of charisma between the characters, making the reader feel excited that one day they're going to hit it off and fall in love. You, as the reader, know what the outcome will be. But with a mystery, the reader is in the dark. The author has to come up with a plot that no one knows about until towards the end of the story and hope they haven’t figured it out. In a mystery, you may or may not allow your reader to know who the bad guys are, according to whether it’s just a mystery or mystery suspense. Do you know the difference between a mystery and a mystery suspense novel? In a mystery, when a knock is heard at the door, the reader doesn't know who's behind it. With mystery suspense, the reader knows who's behind the door and yells to the heroine, "Don't open 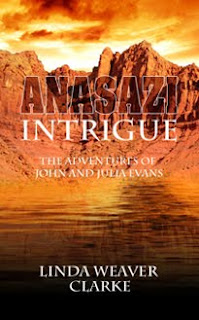 Anasazi Intrigue is the first book in a mystery adventure series called “The Adventures of John and Julia Evans.” It’s about a devastating flood that takes out several homes in a small town, the importance of preserving ancient artifacts, and a few puzzling and mysterious events. Julia is a reporter, and when she finds out about a possible poison spill that kills some fish and neighbor's pets, she has a feeling that something isn’t quite right. Before she realizes what is happening, Julia finds out that this incident is much bigger and more dangerous than she thought. With dead fish, a devastating flood, and miscreants chasing John and Julia, they have their hands full.

Artifact theft is a very intriguing subject. That’s why I call it the Intrigue series. In my research, I found that archaeological thievery is becoming more and more of a problem every year. Did you know that looting is only second to selling illegal drugs? While researching the second book in this series, Mayan Intrigue, my eyes were opened to the problems they have in southern Mexico. When an ancient ruin is discovered, it doesn’t take long for thieves to take it apart. The reason why is because the Mayas used astrological alignments when plann 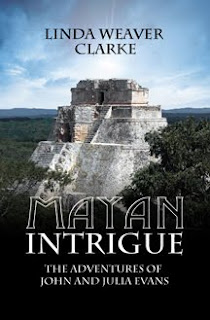 ing their city. Looters have learned the layout of the Mayan cities so they know where to dig. With this knowledge, they can loot a sacred temple in a few days. I also found that artifact theft in Mexico has been taken over by drug dealers from Columbia. In other words, since organized crime has taken over, there is also an increase of violence.

Mayan Intrigue will be released on August 30th and I’m having a week long celebration with a book give-away at my Blog at http://lindaweaverclarke.blogspot.com/. Mayan Intrigue is about the discovery of a priceless artifact that puts Julia’s life in great danger. While on assignment for the newspaper, John and Julia try to enjoy a romantic vacation among the Mayan ruins, but when Julia accidentally comes upon a couple suspicious men exchanging an item, she quickly turns and leaves but it’s too late. Before John and Julia realize what's going on, they find themselves running for their lives through the jungles of the Yucatan. To read an excerpt from each of my books, you can visit http://www.lindaweaverclarke.com/.
Posted by Laurie LC Lewis at 3:01 AM