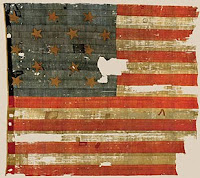 Of all the themes mingled within "Oh, Say Can You See?"--of love under fire; faith in God; loyalty to friends, to nation, to principle--the one most touching a pulse point in readers is how Key channeled his excruciating concerns into an rallying anthem as he sat upon a ship in the Baltimore harbor, watching and worrying during the ferocious assault on Baltimore.

Weeks previous, he had secreted his children away to protect them from the dangers looming as the British made their way to attack Washington. With the assault on Baltimore, he had again been forced to hide his family away, and then

he was subjected to sit helplessly as the enemy descended upon the teeming city.

The moment was profound for Key, but it's what he did with it, what he created during it, that stirs us.

It is these moments, when we are in the flame-scorched crucibles of life, and what we allow them to make of us, that define us. Scholar, teacher, religious leader Elder Neal A. Maxwell called these moments the Divine Tutorials.

We've all experienced these character-defining moments. We've had a few economic downturns that took us to the edge of faith, but our hardest trials have been medical--watching our children hurt or suffer through long illnesses that alterred dreams and caused changes in their course. Many of us might feel we are experiencing one right now in this economy.

Some of these trials may have left us bitter. Some likely made us better. It's not outcome but attitude that determines what and whom we will be at the other end. Will we be stronger, wiser, more grateful, more faithful, less complacent, quicker to love, slower to judge after these experiences? Or will we crumple, fold, hate, and blame? Will we build upon these moments, or use them as excuses?

Key turned his anxiety into action, rallying a broken people. His sensitivities for the oppressed were further livened as he became a more vocal advocate for those without a voice. I think of the WWII generation, often called the Greatest Generation. Like a Pheonix, they rallied from the ashes of the Depression to save the world and build a nation like none before. We can do that. I think it's already beginning.

Have you experiences a divine tutorial? What was it and how did it change you? What did you learn?