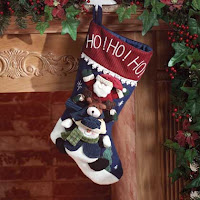 Nostalgia is an inseparable part of Christmas--nostalgia over wide-eyed babes now grown with little ones of their own, for belly laughs and awe, for cherished family gatherings involving faces now gone, and filled with moments when heaven seemed tangible. I'm going to post a few of mine over the next few days. Perhaps they'll inspire the elf in you, or perhaps you'll share your own.

SANTA PROOF- When our oldest son, Tommy, was about ten, his Santa-doubts were voiced. Fearing his doubts would taint the magic for the younger children, we devised to ruse to keep him believing a while longer.

He was to be a package in a Christmas play involving Santa. We took the bow from the family wreath and used it to adorn his costume, but alas, it was left at the party and Tommy felt very bad about that. On Christmas Eve, after plates of cookies and mugs of milk were left for Santa, along with a carrot for Rudolph, the kids went to bed, and the magic ensued.

We took a piece of red flannel and stuck it to the fireplace screen. Nest, we appropriately devoured the treats, leaving traces or crumbs anbd carrot bits, and then Tom wrote little Tommy a note in a mysterious scrawl that said something like:

"Thanks for the treats. Ask your dad to fix the fireplace screen. I tore my britches on it. And here's your bow you left at the party. Thanks for being my helper that night. Love, Santa."

It sealed the deal for Tommy for another year or two, perhaps making him a nerd in the process as far as his friends were concerned, but the magic and the effort we went to were well worth the ignominy. On his last Christmas with us, before marrying his bride, we awoke and all the stockings had been pilfered with a note left behind telling us to search for them. We wondered which of our friends would have sneaked into our house to pull off these shenanigans as all the sibligs tore through the house searching for their stockings. Miraculaously, they were far more excited about solving this mystery than they were about presents, but low and behold, it was Tommy, who wanted to do something that would make our last Lewis Christmas together one we would always remember. And oh. . . . how we have. . .
Posted by Laurie LC Lewis at 7:55 AM