People in the snowy west laugh at easterners who 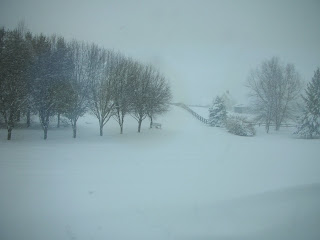 shut schools down and empty grocery store shelves over an inch or two of the white stuff. But experience one of our water-sodden snows, with the corresponding ice and sleet that accompanies the wide temp swings, and you'll understand.

My first novel, "Unspoken" was about a sleet and ice storm that made this area appear as if it had been dipped in liquid glass. It's a treacherous kind of beauty that awes and inspires fearful respect. This one really is just a BIG snowstorm right now--with winds and drifts that are dwarfing our Denali and making the evergreens sway. (This is the scene from my front door).

Really big snowstorms are cyclical anomalies out here. This one is being compared to "the winter of '96'", while some weathermen are saying it will go down in the record books as the biggest accumulation in 88 years. Now that's saying something. It's still snowing with six more inches due today, added to the 20 or so we've already received, but it's hard to measure with the drifts.
For locals--(who understand the traffic- 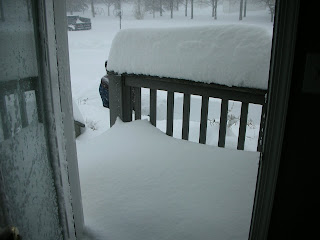 halting, school-closing, power-downing-therefore-no-water-or-heating nature of these storms), the days of pre-storm prep are critical, with a twist of manic-exuberance thrown in. (Back porch)

I don't know if it is so everywhere, but broadcast a storm prediction here, and people's complaints about the impending weather are tinged with a thread of carnival-like excitement. They stock up not only on the bread, milk and tp, but on all their favorite party foods, treating "snow days" like the super Bowl! Now add to the fact that this snow will actually overlap the Super Bowl, and that giddy happiness was doubled.

People were smiling, and patient in long lines. They were helpful and chatting with strangers as they chuckled about "the big one" fast approaching the region. After the storm, if things go as they've always gone, family men with 4-wheel drive vehicles and plows will become "snow-rangers," gallivanting off to rescue stranded neighbors, shuttle medical personal to hospitals, run needed errands for shut-ins and the elderly, and clearing mounded lanes and driveways.

The official call is for everyone to stay home, off the streets, with cautions about the heart-attack and back strain risks of shovelling such a wet, heavy snow. We've had to turn off our heat pump because the snow is so packed around it that it can't draw a 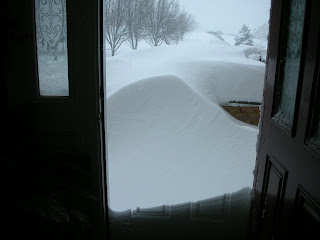 ir. The fireplace is running, the generator is waiting in the wings. We're fine here inside. It's the getting out that will be a trip, and it appears this one will take days to clear. Did I tell you another storm is expected Tuesday?
(Front door pic. Note where the middle of the door is.)

So this forecast is the surprise I was met with when I flew home. Tom was advised to take an earlier flight from LA. His was the last flight his airline scheduled out until Monday. Crazy, huh?

I wish I could forget the shovelling for few more hours, curl up with a soft blanket and a good book, (I have so many waiting to be read), but things here are moving at a lightening pace. My trip to Utah was a professional bonanza. I met with a new publisher who offered me a lovely contract for a literary romance that I'll begin edits on today. We're aiming for a March release! Unbelievable in this industry, but another project fell off their radar and I am blessed to fill that slot!

I'm also finishing up an exciting Twitter History project. Several authors were invited by "Bullies in the Headlights" author, Matthew Buckley, aka M 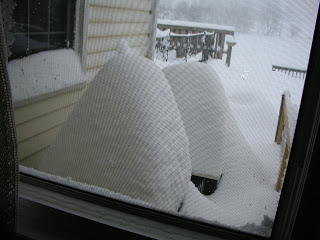 arion Jensen, to assist in this project. We're each studying the journals of one or two pioneers who blazed the original Mormon Trail the Mormon faithful travleed, sometimes in weather more harrowing this. We'll be Tweeting the trailblazers' daily journal entries. It will be a visit to the past in real time, on the actual date the events happened, 163 years ago! We're launching in April! (Those two mounds are heat pumps.)

As soon as these two projects are under control I have a big activity to organize for the youth here in the Frederick stake. And my plan is to get both book 4 and book 5 of Free Men and Dreamers out this year, with the final volume, book 6 out by July 4th of 2011! Sound crazy? Nah. . . Sounds exciting as all get-out!

Time to shovel!
Posted by Laurie LC Lewis at 9:03 AM