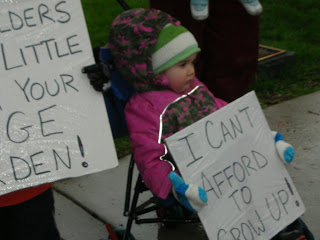 A host of people from a broad spectrum of social, political and private interests assembled yesterday at George Washington's home, Mount Vernon, to declare a return to the founding principles of this nation. Their "Mount Vernon Statement" may be an important step in gelling the still disorganized concerns of the Tea Party movement, and if so, only time will tell if this is the beginning of an effort to launch a third party, or the call to arms for Republicans and Democrats to take Constitutional Conservatives seriously and bend their platforms to answer to this American groundswell.

At the very least, I was pleased to finally see a more succin 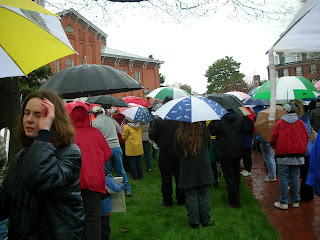 ct and coherent detailing of the Tea Party-ers issues in a format that looks well thought out and less random. I attended the first Tea party rally in historic Frederick, Maryland on a cold rainy day last April, and while our enthusiasm was exhilarating, the overall message was blurred by the attendees anger and disorganization. I believe both parties must finally admit that this group, however disorganized they remain, has found their voice and are making their points known in a variety of ways. They're not going away.

A few weeks ago, after the Inaugural Address, I posted some comments from George Washington's Farewell Address. Since this Constitutional group chose President Washington's home as their symbol for a return to the founding principles of this nation, it's only fitting that we compare Washington's thoughts to their statement, which you click and read right here, and then sign to support if you so desire.

Point 1) Even after the signing of the Constitution, America remained a loose confederation of states with no real national identity. Washington knew the nation's survival required a strong federal government to defend the nation as a whole, and to balance the inequity between the large and small states. He said, "The unity of government...is a main pillar in the edifice of your real independence...of your tranquility at home, your peace abroad; of your safety; of your prosperity; of that very liberty which you so highly prize."

Point 2) He had already seen the strife the party system was creating amongst good people--men who had sacrificed much and bled together for America's survival, but who were engaging in a political tug-of-war. He warned against party politics saying, "It serves to distract the Public Councils, and enfeeble the Public Administration....agitates the Community with ill-founded jealousies and false alarms; kindles the animosity of one....against another....it opens the door to foreign influence and corruption...thus the policy and the will of one country are subjected to the policy and will of another."

Point 3) Knowing that our Constitution was written for, and would only stand when supported by a religiously moral people, he stressed, "Where is the security for property, for reputation, for life, if the sense of religious obligation desert the oaths, which are the instruments of investigation in Courts of Justice?"

Point 4) His economic counsel was almost prophetic considering the recent financial crises. He said, "...cherish public credit. One method of preserving it is to use it as sparingly as possible...avoiding likewise the accumulation of debt....it is essential that you...bear in mind, that towards the payments of debts there must be Revenue, that to have Revenue there must be taxes; that no taxes can be devised, which are not...inconvenient and unpleasant..."

Point 5) Washington knew all too well that today's ally could become tomorrow's enemy, and that dependence on foreign governments results in a loss of liberty. "It is our true policy to steer clear of permanent alliances with any portion of the foreign world..."

Point 6) A trained military was essential to defense, but, said Washington, "...avoid the necessity of those overgrown military establishments, which, under any form of government, are inauspicious to liberty, and which are to be regarded as particularly hostile to Republican Liberty."

I'd say the Mount Vernon Statement would please the first president. Whatever side you may be on in this regard, one thing we can all agree on and celebrate is the fact that we can still have such an open, sometimes-unpleasant disagreement in this land without fear of suppression of thought, or military intervention. How to preserve these liberties is now the concern.

Statement's website.
Posted by Laurie LC Lewis at 5:01 AM